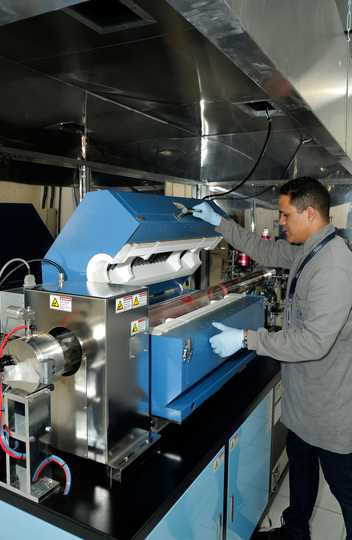 The development of technologies that allow for the production of nanomaterials on a large scale – with the preservation of the properties of the product obtained in the laboratory and guarantees of commercial viability (cost reduction and process optimization) – is one of the challenges taken up by the Center for Technology in Nanomaterials and Grafeno (CTNano), whose headquarters were inaugurated on the last April 16th, at the Technological Park of Belo Horizonte (BH-Tec).

“The Center is a bridge between academia and industry, which demands technological solutions capable of responding to growing social challenges” says physicist Marcos Pimenta, who coordinates the project. These demands include production of carbon nanotubes, graphene, nanoscale polymers and nanostructured cement, characterization and metrology for quality control and development of safety protocols for use and production of nanomaterials (read here in Portuguese).

All CTNano’s areas of action are at the frontier of knowledge and can provide technologies to reduce the imports of products with high added value, which certainly is one of the weaknesses of the Brazilian economy. The four-stage building houses a nanomaterials production plant, as well as laboratories for the work of research groups led by nine UFMG professors from the areas of Physics, Chemistry, Biology and Civil Engineering.

“We do not have a factory here, but pilot plants for the production of graphene and carbon nanotubes in which we seek to dominate the scaling process,” explains Marcos Pimenta, professor at the Department of Physics and coordinator of the National Institute of Science and Technology (INCT) of Carbon Nanomaterials. CTNano can produce today about one kilogram of carbon nanotubes per day, the amount used in the Center’s experiments. “We are the biggest pole of technology development in graphene of Brazil”, emphasizes professor Pimenta.

The initiative, first of its kind in Brazil and a result of a university / company arrangements, is supported by BH-Tec and the Government of the State of Minas Gerais, and has a non-refundable R$ 36 million (around US$ 9 million) financing from four sources: the Technological Fund project (Funtec), the National Bank for Economic and Social Development (BNDES), Petrobras and InterCement. The construction of the building and CTNano’s projects are managed by the Research Development Foundation (Fundep).

Funtec financially supports projects that stimulate technological development and innovation of strategic interest to the country. With Petrobras, the contract foresees the development of advanced polymers that can be used in explorations on offshore platforms.

All CTNano’s fronts are at the frontier of knowledge and can provide technologies to reduce the importation of products of high added value, which is one of the weaknesses of the Brazilian economy.

As Professor Glaura Silva of the Department of Chemistry points out, despite their essentially metallic appearance, the platforms need rubbers, adhesives and other highly resistant polymeric coatings, such as epoxy and polyurethane. “The objective is to improve the mechanical and thermal properties of these polymers because of aggressive demands in environments such as pre-salt exploration, where there are high pressures and very abrupt variations in temperature,” explains Glaura, who coordinates this line of investigation.

The partnership with InterCement enables the development of researches related to the production of nanostructured cement, a type of nanocomposite whose synthesis was based on an unprecedented route and was patented in Brazil and abroad. This line of investigation is coordinated by professors Luis Orlando Ladeira of the Department of Physics and José Márcio Calixto of the Department of Structural Engineering.

“On the intellectual property contracts some products are established, as well as the part that belongs to the University and to each of the partners,” explains Marcos Pimenta, noting that the Center is open to the new industry demands, since nanomaterials have several types of applications. “Within the broad range of possibilities within the nanomaterials technology, there are human resources and infrastructure to solve different problems from those that generated the agreement to create CTNano.”

Pimenta states that the production of materials such as graphene, nanotubes and composite of polymers, incorporated into the operation of CTNano, is a way of developing production plants to later on transfer to industries. He explains that the technology development center deals with two important issues: gains of scale and commercial viability. The pilot plant enables the accomplishment of trials of scaling, cost reduction and process optimization, which can occur, for example, with substitution of inputs.

Pimenta highlights the need to develop innovative technologies. “We have to be prepared to solve new problems, mainly because there is an abyss between academy and industry in Brazil – in the academic environment we do not necessarily analyze cost or scale, or if a prototype is good enough. But is it possible to make one million items with the same quality standard? Looking for answers to questions like this is the role of CTNano “, exemplifies professor Marcos Pimenta.

Professor Peter Lennie, Executive Director of the Worldwide Universities Network (WUN), a research focused organization of higher education institutions that UFMG has been integrating since 2017, paid a three-day visit to UFMG. He was greeted by Professor Sandra Almeida, who reaffirmed UFMG’s interest in intensifying its participation in the group, which brings together 23 universities from 13 countries on five continents. UFMG is the only participant institution from South America at the moment.

During his visit, Professor Lennie held meetings at the Dean for Research, Dean for Graduate Studies and at the Dean for International Affairs’ offices. He also gave a talk introducing WUN to sixty research leaders and people involved in internationalization from UFMG academic community. ‘In these meetings, the ambition of the University, the strength in research and the interest in projects of international collaboration were very clear,’ he said. According to Professor Lennie, the network bets on the importance of connections between universities so that each of its members ‘take full advantage of the talents distributed around the world’.

Professor Almeida emphasized that UFMG has privileged the participation in networks with which there are shared goals, values and concerns. ‘This is the case with WUN. We have identified great potential for collaboration with other member institutions, many of which are already partners. It is a great opportunity to focus our efforts and intensify joint action’ said the President, who is attending the next WUN annual general meeting, which will take place next week in Dublin, Ireland.

UFMG had in 2019 its first project selected in the WUN main research funding program – Research Development Fund (RDF). The initiative entitled Intercultural Communication in Interaction: Multimodal Approaches, is coordinated by Professor Ulrike Schröder of the Faculty of Letters, and addresses language teaching. The project is a joint collaboration with the University of Alberta (Canada), University of Potsdam (Germany), University of Sheffield and University of Leeds (UK).

During the meeting to discuss UFMG’s engagement in the network, Professor Almeida and Professor Lennie also addressed WUN initiatives aimed at finding solutions to the pressing problems of its members, such as the issue of mental health in academic communities. They also discussed the issue of attacks as an attempt to disqualify the role of universities and devalue higher education and scientific research, suffered by higher education institutions in various countries.

WUN has as a primary goal to face major challenges with innovative solutions, drawing on talents from diverse cultural and geographic backgrounds, on issues such as climate change, public health (focusing on diseases such as cancer, cardiorespiratory diseases and diabetes) and understanding between cultures. WUN also invests in education, through graduate mobility programs and experience sharing at undergraduate level. The network counts on the partnership of governments, industries and international organizations. 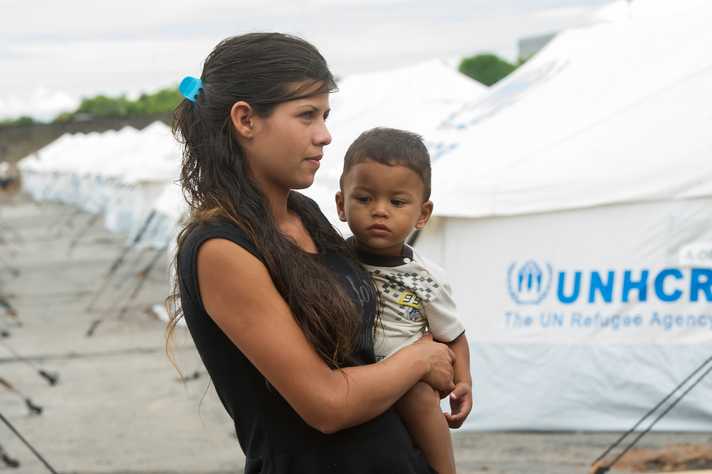 The Commission for the Elaboration of the New Admission Policy for Migrants and Refugees held, in April, its last meeting to define the final draft of the resolution to be voted and approved in UFMG’s Council for Teaching, Research and Community Outreach.

The Commission, composed by representatives of the Offices of International Affairs, Undergraduate Studies, Community Outreach, Cultural Affairs, Student Affairs as well as researchers in the field of international humanitarian law and Portuguese as Additional Language, analyzed resolutions and documents of several Brazilian universities to reflect on an appropriate format for UFMG.

With the new regulations, the main change refers to the public who can apply to  study at UFMG. The previous resolution only considered the entry of political refugees. With the new changes, beyond refugees, political asylum seekers, stateless persons, among other immigrants, will be contemplated.

Another important revision is the creation of an annual selection process for the admission of this group of applicants. In the previous resolution (from the year 2004), it was defined that the entry of refugees depended on specific criteria of each undergraduate program. These programs were able to conduct independent selection processes.  A unified selection will promote a more transparent and uniform process.

With such changes, it is expected that the reception of foreigners in situations of vulnerability will be facilitated, promoting the access to quality higher education to specific groups.